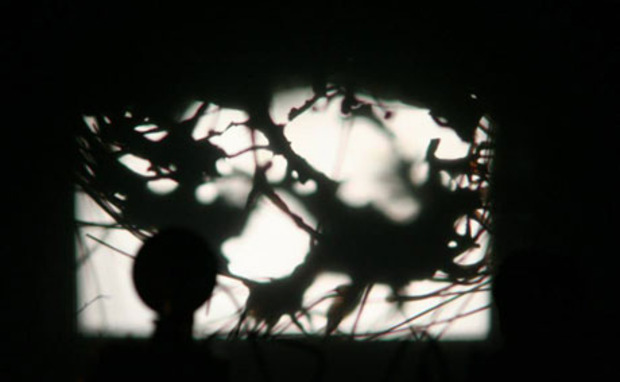 Hair in the Gate

Hair in the Gate explores the act of cleaning a 16mm projector gate for it’s performative qualities. Photochemical film is susceptible to dirt and dust particles getting picked up and trapped in either the gate of the camera or projector. These particles are made visible: dark tangles of fluff or a dancing hair-line, obscuring and distracting from the intended image.

For this performance, hair cut from the head of the performer is firstly intentionally and directly applied to the gate of the projector, made visible on screen, then removed and cleaned in real time using canned air. Hairs trapped in the gate of the projector is seen to melt, curl and burn on screen, filling the air with the familiar acrid and sulphurous smell of burning keratine.

For the second part of the performance liquid (human saliva) will be applied directly to the filmstrip (saliva being found to be the most effective way of removing unwanted hairs and dirt by projectionists when all other methods of cleaning fail).

A live feed from the optical soundtrack of the projector picks up the sound of hair fragments, canned air, and saliva as it passes through the projector.

This short edit comes from the first performance of Hair in the Gate from October 2013 at the Living Film screening at no.w.here. A review of the event can be found here: nowhereopenstudio.blogspot.co.uk/2013/11/film-again-and-again.html

Hair in the Gate (Living Film edit) from James Holcombe on Vimeo.