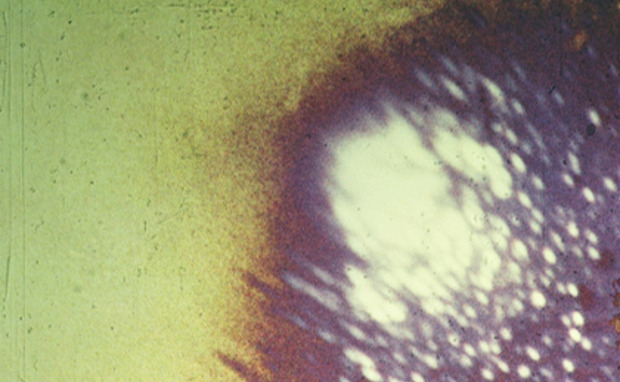 Ley Farm is an expanded slide work for four carousel slide projectors with timers, and front or back projected screen of variable dimensions. It was premiered at no.w.here in October 2009 as part of the Light Reading series. The visual aspects of this work use single frame extractions of colour Super 8 footage depicting Ley Farm in Lancashire, England — a place I have known and visited for over 30 years.

The film concentrates on areas where light is scarce or absent (barns, outbuildings, stables), and particular details of the environment; spiders webs, peeling paint, worn curtains nailed over a window, water troughs and detritus. The film was hand processed and solarised, a technique, which turns the dark areas of an image into masses of gold grain, whilst retaining a recognisable photographic impression of the source. This effect in the original footage is random and flickers in time with the reel on which it was processed. The most interesting frames from the footage (there being 18 frames per second to create the illusion of real-time motion) were selected and transferred to 35mm slides, to be shown by the carousel projectors as greatly reduced, alternating sequences. Through this, the illusion of natural motion is almost entirely subverted, where each individual image/frame is relieved from the confines of the animation it serves to reconstruct, and may now be considered for its free-standing photographic qualities.

The sounds for the work were recorded on location over a single weekend in May 2009, using a DIY hydrophone and contact mics, mid-’90s computer keyboard microphone and a Zoom H2 recorder. The sound material was then handed over to Adam Asnan to arrange for presentation. The sounds of the location, being that they consist of a wide range of phenomena and techniques, substitute for the absence of natural atmosphere and temporality in the images, of the living-breathing character of the environment. This accentuates the subverted motion of the image via an array of aural scenes that retain, even assert, their natural motion by contrast.