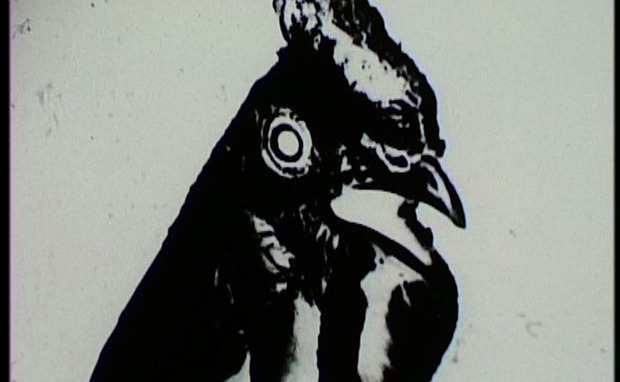 Two pieces of found footage purchased at a car boot fair (one a travelogue focusing on American Gravestone inscriptions of the founding fathers, the other a loop of a rooster culled from Aesop’s Fable of the Fox and the Rooster) are subjected to a process of deconstruction then a re-construction using a 16mm splicer. The graveyard film being originally 24 scenes long, was cut so that scene 24 lasts 24 frames, and so on down to scene one lasting a single frame. As each scene runs out of film, a frame of rooster footage in negative is inserted. The film gradually shifts from shots of gravestones to subliminal shots of the rooster until this finally becomes the dominant image. An absurd film filled with unintentional error and hopefully some structuralist materialist humour. 16mm black and white film (10 mins)